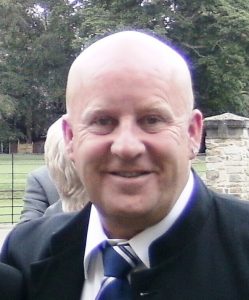 Gary works non-stop raising sponsorship, raising awareness of our club and persuading fans and North East clubs to donate kit and decent 2nd hand boots. Gary has also been one of our “Main” sponsors since day one, and is the main communication link from the UK to our team. 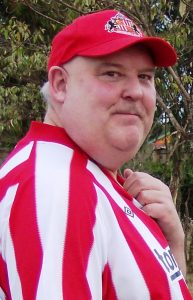 Alongside Gary he also works tirelessly raising awareness of our team and academy. His house is used as a “Storage area” for all donated kit, until those items are ready to be sent to Kenya. John has also been one of our main sponsors since day one.

John owned a chain of pharmacies before he finally sold out, and decided it was time to put his feet up and relax. Now he has much more time to fully concentrate on his dedication and passion for our club and academy. 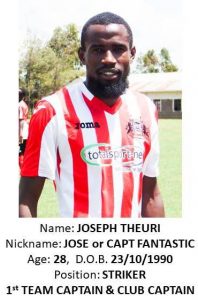 Known to everyone as “Jose” he is the heartbeat of our club in Kenya. He looks after all the club finances in Kenya, organises all travel for away games, he makes all the communications to the FKF (Football Kenya Federation) In fact he basically organises everything on the Kenyan side, But most of all he is a fantastic captain and motivator. Without Jose our team would most likely cease to exist. In January 2021 Jose was given a position on the FKF (Football Kenya Federation) youth development committee. 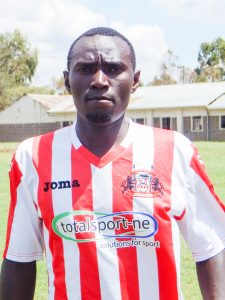 Position; Head Coach. (Still a player in our WAZEE Team)

Paul has been with our club since day one, he began as a 1st team player before moving up as the head coach of our 1st team

During this period he has sat his full coaching course, and in June 2020 was promoted to 1st team coach. Since he has taken up that position, our results have greatly improved. He is very dedicated to our club and demands nothing less than 100% in training and games. 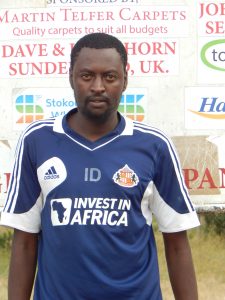 Ben has also been with our club from day one, he oversees all our academy players, and on Matchdays is also the 1st team assistant coach.

Position: Junior, Under 15’s and Under 17’s academy coach. (Also still a player of our WAZEE TEAM)

Ngasho has also been with our club from day one, and was promoted to his current position in 2018. 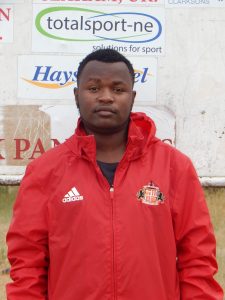 Even though Kabuda has been with our club since day one, he has never been a player, but he has always helped out with jobs on matchdays since the age of 13. He is a very reliable kid who loves the club, and we felt it was worth rewarding him as our club mascot for his dedication. 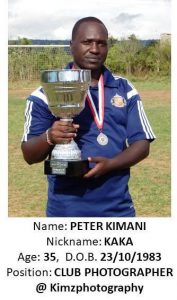 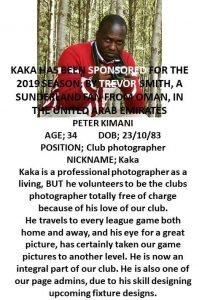 Kaka joined our club in 2017. He is a professional photographer by trade, but offered his services “Free of charge” to become our club photographer, due to his love of the team. He travels to most games home and away, capturing great action pictures. We are blessed to have him on our team. 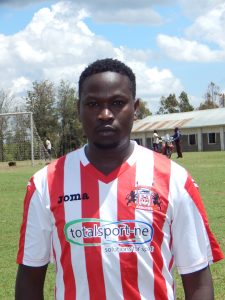 Position: Club committee member, and a former 1st team player who now plays for our WAZEE team. He is also the commentator and cameraman who covers all the live streaming of home and away league games.

Teddy has also been with our club since day one, and helps to mentor the academy players on the importance of been upright citizens within the community. 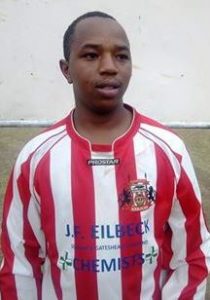 Chugan has also been with our club since day one, and also helps to mentor the academy players on the importance of been upright citizens within the community. He also helps on important decisions within our club. 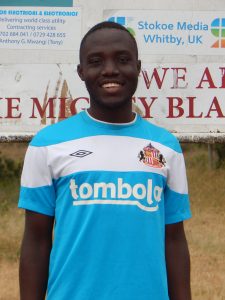 Joseph joined our club in 2019. He lives very close to captain Jose, and after a short while he was offered the job of cleaning our kit as he had no full-time job. He does a magnificent job hand washing all our kit, and is the only person within the whole of our club who receives any form of payment (He receives 400ksh per week for washing our kits, in UK £’s this is approx £3) Some weeks he cleans up to 3 full sets of kits, depending if our academy lads have games.

He is now, also our Kit manager, and is responsible for making sure all our different kits are in their appropriate kit bags, ready and prepared for any game. 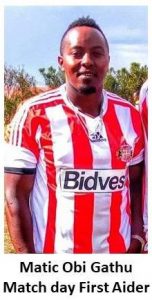 Matchday first aid man, attending to any matchday injuries. Matic Obi was originally a loyal fan who followed our team to both home and away games, but we rewarded his loyalty by awarding him a place as our matchday first aider, which now enables him to travel for free with the squad to away games. 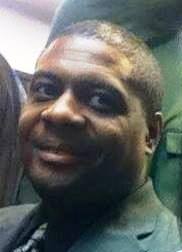 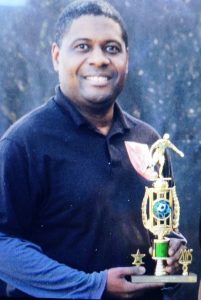 Known to all  of us as “Dre”, He is our I.T. Expert and the man responsible for building our website totally free of charge. He has a huge passion for football, and plays a vital role in local football, in his hometown of Atlanta, Georgia, USA. Dre used to be a Man Utd fan, but we have converted him into a dedicated SUNDERLAND AFC KEROCHE fan.

He also helps out at a local grassroots soccer team in Atlanta called SANDY SPRINGS FC.

Well, we have been diverted from Kericho Green Stadium to Kirunanaka pitch for today's game.

The Kericho region is known as THE GREEN SIDE, because it gets more rain than any region in Kenya.

And this is the pitch we are playing on today, (let's hope our lads can swim) 🧜‍♂️🧜‍♂️🧜‍♂️

But we are not phased and are determined to come home with the points. ... See MoreSee Less

The lads have arrived safely in Kericho Town, ready for today's big clash away at Kericho FC.

This morning we departed Naivasha at 5.30am and after a long 5hr journey, we are now safely in Kericho.

We are now at the huge KERICHO GREEN STADIUM 🏟 but we have been told that the venue has now changed to another pitch, 1km away. ... See MoreSee Less

It is a public holiday to honour all Kenyans who have contributed towards the struggle for Kenya's independence.

As we mark this years' mashujaa day(HEROES' DAY) our lads shall be travelling to KERICHO to play against KERICHO FC at NISHAKAM COMPLEX.

📢WE CALL ALL OUT ALL OUR FANS TO CELEBRATE THIS DAY BY CHEERING OUR LADS TO VICTORY.
#MashujaaDay2021
#letsdothis ... See MoreSee Less

ONLY 3 GAMES REMAINING
AND THIS IS THE CURRENT LEAGUE STANDINGS AFTER YESTERDAYS GAMES.

ANOTHER 3 PLAYERS SPONSORSHIPS HAVE BEEN RENEWED, READY FOR THE NEW SEASON.

If you would like to help our club continue our remarkable success since we were established in 2012, which includes 3 promotions, 22 cup final victories, and a thriving academy that has 135 players in various age groups, then please feel free to contact our UK President GARY LAMB, from Seaham, UK on UK mobile number: 07880732078.
A players sponsorship for a full season is only £50 (Less than £1 per week)
GARY can give you all the relevent information, without any commitment, then you can choose if you'd like to become a sponsor, and our club can continue to make dreams come true.
To read our full story since we were established in 2012, then please visit this link to our website.
safckeroche.com/about-us/ ... See MoreSee Less

IT SEEMS LIKE GOD IS SHINING ON OUR CLUB.

We have just received the news that our nearest rivals in the league, were also defeated today.

So we maintain our 4pt lead at the top of the table.

Only 3 games remain and on Saturday KERICHO ROVERS are coming to our pitch for the CLASH OF THE TITANS ... See MoreSee Less

HEARTBREAKING, BUT WHAT A GAME

This was certainly a game of 2 halves as we trailed 3-0 at half-time.

Restart took the lead in the 7th minute with a "Worldie" of a volley from 30-35yds out.
Then just 4 mins later they extended their lead after an attack down the right wing and a cross found their striker 6yds from goal to score.
In the 26th minute the ref awarded Restart a penalty, from which they scored to make it 3-0.
After that we took a hold on the game, with CAPT JOSE, JONNAH and PHILO all having chances to no avail.
HALF-TIME.
In the second half we decided to push further forward, and had chance after chance, then in the 65th minute a cross found the head of CAPT JOSE to score 3-1.
We were now peppering Restarts goal, but a combination of good defending, and some great saves seemed to prevent any more goals.
BUT!!!! in the 89th min GATHOGO spotted their keeper off his line and shot from the halfway line to score a "Wonder goal". 3-2.
Even in the remaining minute plus injury time, DICKENS shot just over the bar, and CAPT JOSE and PHILO had shots saved.
As the late great Jimmy Greaves would say "Football is a funny old game" and sometimes you don't always get what you deserve.
We will dust ourselves down, and prepare for our next "BIG GAME" this coming Wednesday as we travel to the huge KERICHO stadium to face KERICHO FC. ... See MoreSee Less